With the currently available scientific knowledge and tools to guide prevention and treatment, every death due to cholera can be avoided. Cholera, however, continues to take a heavy toll in developing countries especially in Sub-Saharan Africa, where it has become recurrent for the past forty years favored by poverty, poor hygiene and the vulnerability of populations living around lakes and those affected by conflicts or natural disasters. To eliminate cholera from 20 of the 48 endemic countries in the world, the World Health Organization (WHO) has established a global roadmap to 2030 stipulating a rigorous focus on surveillance and source tracking of cholera outbreaks at country level.

Tanzania has been reporting cholera almost every year since 1974 and is one of the endemic countries on the list of the WHO. This Doctoral study intended to contribute to the pool of knowledge that will enable Tanzania to get rid of the cholera epidemics by 2030. The study applied genomic and epidemiological tools as well as microbial ecology approaches regarding the key element of the global roadmap, which is to investigate how cholera emerges, evolves and reemerges in the Tanzanian context and how V. cholerae strains persist during and between outbreaks.

Overall, spatial analyses revealed that cholera hotspots in Tanzania include populations living near lakes and central regions, being areas where interventions should be prioritized for long-term cholera control. Moreover, we demonstrated that the endemicity of cholera in Tanzania is due to the existent rampant outbreak foci in the Eastern African region as a result of cross-border transmission of toxigenic V. cholerae O1 of three different sub-lineages of genotypes ctxB3 (T5), ctxB1 (T10), and ctxB7 (T13) emanating from the same 7PET lineage. Toxigenic V. cholerae O1 recovered from Lake Victoria were phylogenetically related to pandemic strains causing outbreaks in Tanzania and other East-African countries with as low as three SNPs and identical accessory genome contents were observed between strains from the two niches. We further report the existence of environmental reservoirs such as fish and phytoplankton favoring survival and transmission of pandemic V. cholerae O1 in Lake Victoria, which offers optimum temperature and alkaline pH that enhance persistence and resurgence of the pathogen throughout the year. Antimicrobial resistance was surprisingly limited in the studied strains, especially among the T13 sub-lineages causing recent epidemics. These were mostly susceptible, with 10-kb nucleotide deletions on the SXT/ICE that normally encodes resistance to many antibiotics, including sulfamethoxazole and trimethoprim. The environmental strains, however, harbored genes for resistance to heavy metals, a phenotype that could support their growth and survival in aquatic environments. The V. cholerae O1 strains also harbor autoinducers (AI-2 LuxP and LuxQ) involved in quorum sensing and biofilm formation for their environmental fitness until resurgence. 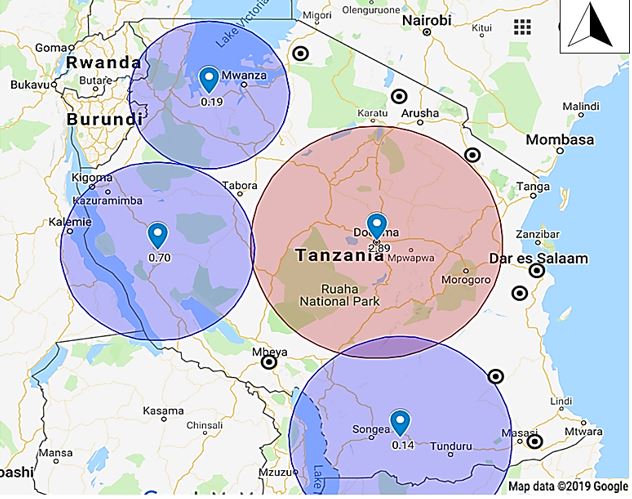 This Thesis revealed that if Tanzania is to become free of cholera by 2030, following suggested actions in the global roadmap for cholera control, there is a lot to be done politically based on the scientific insights provided in this Thesis. Authorities need to mobilize more resources and demonstrate more political determination towards implementation of hygiene and sanitation programs, prioritizing high-risk areas including the lake zones. There is also a need for more investment in accurate and holistic reporting of cholera in order to provide reliable data for action. Most importantly, the genetic fingerprints of strains causing outbreaks in Tanzania and its neighboring countries reveal unequivocally a cross-border transmission of similar clones. This finding calls for coordinated collaborative control measures, such as early vaccinations in the entire African Great Lakes Region, when a neighboring country declares an outbreak. Furthermore, the presence of environmental reservoirs (like fish and phytoplankton) for V. cholerae favoring resurgence of the pathogen between outbreaks in Tanzania should be considered when designing control strategies in the region. This is important because, despite the cross-border evidence of human-mediated transmission of V. cholerae, the inability of the pathogen to survive long-term in acid conditions inside the human gut, and especially the high infectious dose required for disease, continuous transmission by humans alone is likely impossible and therefore very dependent on environmental reservoirs that refeed the cycle.